By Heidi Anderson-Ferdinand, Intern in Special Collections and Rare Books 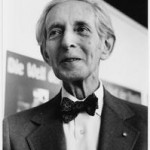 Working as an intern in Special Collections, Rare Books and Manuscripts I get the unalloyed pleasure of opening box after box, folder after folder, and working my way through the contents. You might think that when you read through material in an archive you are walking among ghosts, but I find that I feel like the ghost, watching from behind the curtain as the players move across the stage. I listen in to conversations written across a page, look into the faces and places in photographs that held meaning for the subject of the archive, read newspaper articles that refer to performances or awards. It is an autobiography in raw material and can feel surprisingly intimate.

Throughout the spring I worked on the Arthur Kleiner collection. Each day would bring a new discovery; correspondence between Mr. Kleiner and composers and film historians from around the world, photographs and postcards, reading room tickets from London, pages of research material for a book on music composed for films. There were many surprises waiting in the wings, like the day I opened a folder and found a stack of glossy photographs … Anna Pavlova! Nijinski! Especially interesting were the letters to Arthur Kleiner from film historian/film maker Jay Leyden. Together these two gentlemen tracked down leads in a search for the missing (complete) version of Miesel’s film score for Eisenstein’s Battleship Potemkin. Any student of early cinema would be interested in reading this collection of letters.

Arthur Kleiner’s sheet music collection is extensive. Many of these pieces, published between the 1800’s and the mid-20th century, have beautiful covers. If you placed them in chronological order you could trace the evolution of printing processes during this time. One of the hand-written pieces is the music Kleiner wrote for Mike Mulligan and His Steam Shovel. This was one of several pieces composed to accompany the narration for films of classic children’s picture books produced by Weston Woods. The collection also includes a great deal of music that was published for the purpose of silent film accompaniment and these are among my favorite pieces. Many are titled as a general mood with specific suggestions included to help the musician narrow their choice. One example from 1917 is Andante Misterioso No. 6 by Joseph Carl Briel with the following suggestions;

Note: For grotesque comedy scenes A. will prove quite available But B. must not follow it, except the scenes become of the rough house nature. C. can be played to follow A. in such scenes.

The energy of the early film industry can be seen building momentum and spreading out into supporting industries, such as music, when you look at these pieces that have been prod

uced specifically for the purpose of silent film accompaniment. I didn’t see any pieces for a heroine tied to the railroad tracks with an oncoming train in the distance, but I wouldn’t have been surprised if I had!

I’ve enjoyed getting to know Arthur Kleiner through his letters, music, photographs, research and recordings. If you would like to meet him I hope you will visit Andersen Library…in a very real sense, he’s here.

Arthur Kleiner was born in Vienna in 1903. He spent several years working with director Max Reinhardt before moving to New York in 1938.  In 1939 Mr. Kleiner became the musical director for the Museum of Modern Art’s Film Department. At that time he was said to be the “world’s only full-time pianist for silent films.”  During those same years, he was also a pianist and composer for George Balanchine (1938-1939) and Agnes De Mille (1939-1959).  After his retirement in 1967, he moved to Minnesota, where he was associated with the Walker Art Center and the Guthrie Theater while continuing to work internationally. In 1979, Kleiner received the “Film Band in Gold” from the West German government for “many years and exceptional activity in German film.”  Mr. Kleiner died in 1980.