I spend a lot of time looking at old things. Some of my colleagues work with items hundreds of years old. In the Gay, Lesbian, Bisexual and Transgender archive that I curate, “old” usually means the 1950’s – 70’s. That may not seem old, but the decades since have seen enormous social change and the items capture moments in time that might otherwise vanish.

One of those moments in time will happen tomorrow. Last month the Legislature voted to make Minnesota the 12th state in the country to legalize same-sex marriage. By law, August 1, 2013 will be the first day same-sex marriages are performed and legal in the state. Tomorrow the large counties in Minnesota will begin taking early applications for same-sex marriage licenses.

What will vanish is a link back to 1970. On May 18 of that year, Jack Baker and Michael McConnell applied in Hennepin County, Minnesota, for the first same-sex marriage license in the United States. At the time, neither the laws nor the application form imagined such a thing and did not preclude it. In the publicity and furor that resulted, Minnesota and many other states passed legislation that explicitly outlawed same-sex marriage.

The Minnesota application for a marriage license enforced gender in several ways. One section is labeled “Groom.” It includes a box for the applicant’s sex. There is only one circle, “M,” and the form comes completed. The next section for the “Bride” also has only option, again already marked “F.”

And finally, each applicant is required to sign in front of a notary:

“I hereby solemnly swear, under penalty of perjury, that all of the above statements of fact are true in every respect; that we are no nearer of kin than the first cousins once removed; that neither is committed to the guardianship or conservatorship of the Commissioner of Public Welfare without written consent of the Commissioner of Public Welfare; that there is no legal impediment to this marriage; that neither of us has a spouse living; and that one of the applicants is a man and the other is a woman.” (bold added) 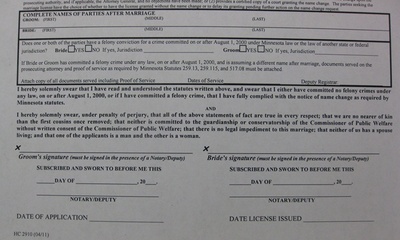 I don’t know what the form will say tomorrow, but there will certainly be significant changes. Our link back to Jack and Michael will be reshaped by the new form and the new legislation.

I have two copies of the existing marriage application form sitting on my desk. And tomorrow I will visit the website and print two copies of the new form. I will put them all in a folder and add them to the Tretter Collection. Because an archive preserves these moments in time and prevents history from vanishing.