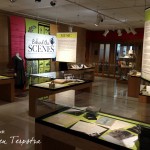 “Behind the Scenes: Twin Cities Performing Arts and 50 Years of the Guthrie Theater,” April 1-June 28, 2013, presented by the Performing Arts Archives at Elmer L. Andersen Library.

We find magic on our stages, and that magic comes from many sources, at once sublime and profoundly

human. The work that goes into every production we see is a prelude to the thrill of theater, dance, and orchestra performances. Indeed, as much energy goes into hiding the gears, logistics, and stagehands that make the performing arts appear utterly complete and seamless as in showing audiences a well-set world, wondrously brought to life by actors, dancers, and musicians.

There are great pleasures to be found in peeking behind the curtain, into the rehearsal studios, costume and prop shops, offices, and boardrooms that make opening night, and every night following, po

ssible. It is there we find the genesis of an idea–for a theater that will change Minnesota, or a groundbreaking ballet company, or a revolutionary version of a well-known story–transformed through personalities, budgets, missions, director’s notes, nightly performance reports, and beautiful costume renderings.

The first 50 years of the Guthrie Theater offers a tremendous opportunity to pore through the extensive Guthrie Archives, housed at the University of Minnesota since 1967. In them, we find a beautiful legacy, still being built with each season of plays and programming.
With the close of every season and each production, sets are struck and works of art are dismantled, but there are traces left to be preserved, studied, and displayed. The Performing Arts Archives sustains these stories, many more than ever graced our stages.

“Behind the Scenes: Twin Cities Performing Arts and 50 Years of the Guthrie Theater” celebrates the work, and the enduring magic, of our extraordinar

y performing arts community, on and off the stage.