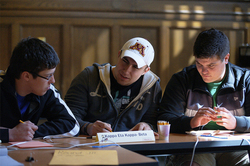 More than 100 students will be sweating it out this Sunday to come up with the right answer to such questions as “What do you call the spherical molecule with 60 carbon atoms?”

One of those students will be Scott Miller, a senior at the University of Minnesota College of Science & Engineering. It will be Miller’s third year as a participant in the Science Quiz Bowl, an annual event sponsored by the University of Minnesota Libraries for students at the College of Science & Engineering. But Miller sees it as more than a “nerd food fight” with questions limited to quarks and the periodic table.

“I’ve witnessed teams being appraised of their knowledge from 50 Cent to the human tooth to the Legend of Zelda,” said Miller, whose team won the competition in 2011. “Yes, this is Science Quiz Bowl, but we dorks know how to have a fun competition.”

Championship round is scheduled for 7:30 p.m.

The 10th Annual Science Quiz Bowl takes place Sunday, April 14, from 1 to 8 p.m., at Walter Library and kicks off CSE Week, a week of events organized by science and engineering students. The tournament features 32 teams – four students per team, undergraduates and grad students – who compete for fun, prizes, and the coveted 1st place championship. The championship round is scheduled for 7:30 p.m. in Room 101.

“The Science Quiz Bowl is unique because it’s a fun extracurricular activity that still focuses on the essence of CSE students, letting them show how smart they are and how much they know,” said Kristine Fowler, Mathematics Librarian and Interim Director, Physical Sciences & Engineering Library. “We love being part of CSE Week.”

“It’s a great event. It definitely brought out a sense of community,” recalled Ryan Peterson, who captained the first championship team in 2004 as a junior with his brother, Grant Peterson, and two friends, Kevin Schmitz and Adam Jungkunz. “People in science and engineering wanted to show off their knowledge and it really struck a chord.”

Peterson graduated from CSE, but not before winning the Science Quiz Bowl again in 2005. He went on to the University of Minnesota Medical School, earning his M.D. He’s now psychiatry resident at Boston University.

The Science Quiz Bowl experience, he said, was a highlight of his years at Minnesota. “I thought it was one of the most successful events of my college career,” he said.

Though having fun and building community are key elements of the event, Miller nevertheless compares the intensity of the contest to playing 10 consecutive games of Jeopardy. “These teams pour the insides of their craniums into the event.”

“Given the Libraries’ role in the campus’s intellectual life, hosting an event that celebrates knowledge is a perfect fit,” Fowler said. “It’s part of the Libraries’ outreach to provide positive student experiences, and they obviously enjoy playing in the tournament, which is why it’s grown so much over the years.”