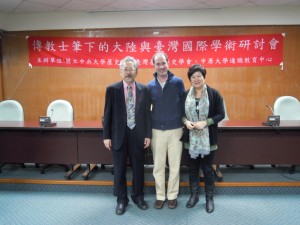 This past December, Archivist Ryan Bean delivered a paper at the International Symposium on China and Taiwan in the Writings of Western Missionaries, National Central University Taiwan. Titled Selling the Mission: The North American YMCA in China 1890-1949 his paper gave a brief overview of the work of the Young Men’s Christian Association in China and their changing relationships with the missionaries who invited them into the country. The YMCA may be found in many histories related to missionary work in China however normally their role is relegated to that of a supporting character. In fact, the YMCA had a profound impact on the nature of Chinese Christianity and provided an institution for Chinese Christians to work on reforming their society.

The paper was well received and will be published in a forthcoming volume. A pre-print version may be found in the University of Minnesota’s Digital Conservancy. With Ryan in the photo is Professor Peter Wang the symposium organizer and director of the Graduate Institute of History at National Central University Taiwan and Professor Wang’s wife.