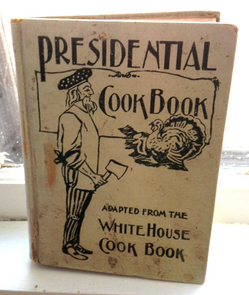 We’re a week from Thanksgiving, so here I am with Turkey Tips from the Kirschner Collection! This year, since we also just finished up a presidential election, I’m giving you tips from the Presidential Cook Book (1910) which was adapted from The White House Cook Book. As you can see, the cover of this cookbook features a picture of a turkey … and a hatchet-wielding chef (no pardon for you, Turkey!) Now, on to the tips:

When carving use a chair slightly higher than the ordinary size, as it gives a better purchase on the meat, and appears more graceful than when standing, as is often quite necessary when carving a turkey… More depends on skill than strength. The platter should be placed opposite, and sufficiently near to give perfect command of the article to be carved, the knife of medium size, sharp with a keen edge. Commence by cutting the slices thin, laying them carefully to one side of the platter, then afterwards placing the desired amount on each guest’s plate, to be served in turn by the servant.

When serving fowls, or meat, accompanied with stuffing, the guests should be asked if they would have a portion, as it is not every one to whom the flavor of stuffing is agreeable; in filling their plates, avoid heaping one thing upon another, as it makes a bad appearance.

Gravies should be sent to the table very hot, and in helping one to gravy or melted butter, place it on a vacant side of the plate; no pour it over their meat, fish or fowl, that they may use only as much as they like.

And finally, here is a recipe to use up some of that leftover turkey:

Pick the meat from the bones of cold turkey and chop it fine.
Put a layer of bread crumbs on the bottom of a buttered dish, moisten them with a little milk, then put in a layer of turkey with some of the filling, and cut small pieces of butter over the top; sprinkle with pepper and salt; then another layer of bread-crumbs, and so on until the dish is nearly full.
Add a little hot water to the gravy left from the turkey and pour over it; then take two eggs, two tablespoonfuls of milk, one of melted butter, a little salt and cracker-crumbs as much as will make it thick enough to spread on with a knife; put bits of butter over it, and cover with a plate.
Bake three quarters of an hour. Ten minutes before serving, remove the plate and let it brown. 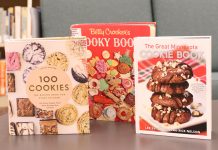 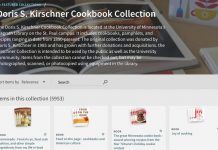