“Booby Trap,” “Good Time Girls,” and “Smash the Prostitution Racket!” These were a few of the terms used during early- to mid-20th century public health campaigns by the American Social Health Association.

The association used these in education messages, along with research, undercover investigations, and civic action in an effort to eradicate prostitution and human trafficking, while promoting the prevention and proper treatment of STDs. 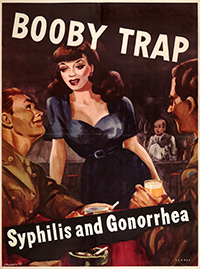 “One of the things that the American Social Health Association believed in strongly was bringing prostitution, human trafficking, and STDs to light,” said Linnea Anderson, a curator with the Social Welfare and History Archives at the University of Minnesota Libraries. “They believed that if you swept it under the rug, kept it secret, that it allowed them to flourish. It’s one of the reasons we selected the cartoon, ‘If we can get the beast out of his lair…’ for the theme of the exhibit.”

Today, these terms are outdated, humorous, even offensive. But, in some respects, that makes for a great teaching tool.

“It’s really a great history lesson when it comes to sexual health,” said Darren Terpstra, the exhibit designer. “You’re able to see how this all started and where we’ve come today, because it’s very relevant today. But what you get to see is not only how far we’ve come, but how we actually haven’t come very far at all, in some respects.”

The ASHA sent investigators into communities – sometimes openly, sometimes undercover – in attempts to learn more about how a community may or may not facilitate the functioning of a prostitution racket.

“For example are there particular hotels where you can rent by the hour, are there cabbies, who on the side, will bring you to a house of a ill repute, are the police turning a blind eye?” Anderson said. Investigators also looked into whether communities had illegitimate practitioners offering “quack” or ineffective treatments for syphilis and gonorrhea.

Anderson added that investigators used the information in meetings with community, civic, and religious leaders in efforts to combat prostitution.

“The American Social Health Association called that the American plan,” Anderson said. “They were against what they referred to as the European plan or the European model of segregating and tolerating prostitution, and inspecting prostitutes, who we would now call sex workers. They thought that prostitution should be eradicated entirely.”

Were the campaigns successful?

In both World War I and World War II, the ASHA worked with the United States military on sexual health campaigns to reduce the rates of sexually transmitted diseases, and Anderson said, there’s evidence that each of these campaigns was successful.

“The reason for this, historically, was that looking back on the wars in U.S. history, there had been a spike in STD infections in every war,” Anderson said. “And there is evidence in their own files and elsewhere that they were successful in decreasing the rate of infections amongst troops in both wars.”

Were the campaigns successful over time? Anderson said that’s a potential research project in the offing. But one thing is for certain: There are plenty of materials to draw from in the archives.

Said Anderson: “The reality is that there are still STD infections, STDs are still a public health issue. Prostitution and human trafficking are still serious issues. But that doesn’t mean that a particular campaign hasn’t been successful.”

The American Social Health Association, which started in 1914, is still active in promoting sexual health, the prevention of sexually transmitted diseases, as well as health policy and advocacy, Anderson said.

The collection dates back to 1905 through the 2000s and contains education materials, research information, and statistical studies of various communities. “It’s just a real rich and varied set of materials,” Anderson said.