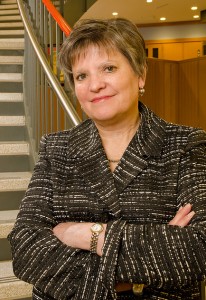 Wendy Pradt Lougee, University Librarian and McKnight Presidential Professor at the University of Minnesota, began a one-year term as president of the Association of Research Libraries (ARL) on Oct. 11, during the ARL Membership Meeting in Washington, D.C.

Lougee succeeds Winston Tabb, Sheridan Dean of University Libraries and Museums, Johns Hopkins University. Tabb continues to serve as a member of both the ARL Board of Directors and the ARL Executive Committee as Past President.

Also serving on the Board in ex officio capacities are: Carton Rogers, Vice Provost and Director of Libraries, University of Pennsylvania; James F. Williams II, Dean of Libraries University of Colorado Boulder; and Charles B. Lowry, Executive Director, ARL.