Minawaanigwad vai!! (This is exciting!!) 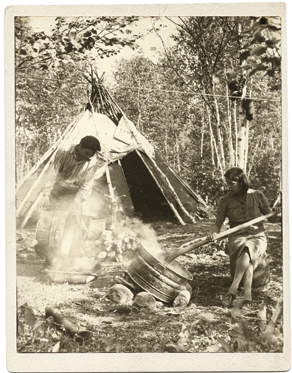 Speakers of Ojibwe–and those who’d like to learn the language–have a wonderful new reference tool created by the University Libraries, the U’s American Indian Studies Department, and the Minnesota Historical Society. The Ojibwe People’s Dictionary (http://ojibwe.lib.umn.edu) is a searchable, talking Ojibwe-English dictionary that features the voices of Ojibwe speakers.

John D. Nichols, professor in the American Indian Studies department and one of the foremost Algonquian language experts, approached Jason Roy, director of Digital Library Services, to move his print dictionary A Concise Dictionary of Minnesota Ojibwe into a dynamic, online environment. Nichols envisioned expanding the original dictionary as well as providing context for the words. The entry for wild rice, for example, includes audio clips of four Ojibwe elders speaking the word manoomin, photos from the collections of the Minnesota Historical Society and Great Lakes Indian Fish and Wildlife Commission, and snippets from texts including meeting minutes, reports, and research manuscripts dating from 1922. 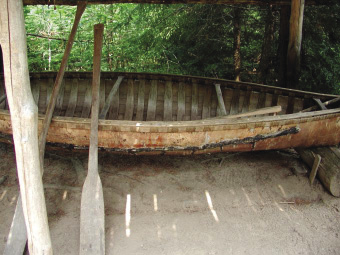 “The Libraries were honored to lead the software and interface development for the dictionary,” said Associate University Librarian John Butler. “The project uniquely demonstrates how the Libraries work with faculty and researchers to support new forms of scholarship.”

Educating the next generation of scientists . . .

In partnership with librarians at the University of Minnesota, the University of Oregon and Cornell University, Purdue University Libraries received nearly $250,000 from the Institute of Museum and Library Services to develop programs that train students to find, organize, use, and share data efficiently and effectively.

The University of Minnesota team, lead by co-principal investigators and assistant librarians Lisa Johnston and Jon Jeffryes, are working with professor of civil engineering Arturo Schultz to train his graduate students to manage structural engineering data, such as structural health monitoring of bridges, including the new I-35W bridge. The training program will build on the Libraries’ expertise in digital data management best practices and their successful “Creating a Data Management Plan for your Grant Application” workshops that have been offered to faculty since December 2010.

. . . and preserving the past generation of theater

A $159,200 grant from the Minnesota Historical Society will enable the reformatting of magnetic media and film held by the Performing Arts Archives. The old recordings to be preserved are from six local and important performing arts organizations: the Guthrie Theater, Penumbra Theatre, James Sewell Ballet, Theatre de la Jeune Lune, Minnesota Orchestra, and Minnesota Dance Theatre.

Scholars dig for treasures in the collections

Nine students and faculty members from institutions around the world were named this year’s Andersen Research Scholars. Named for former governor and University of Minnesota regent Elmer L. Andersen, the program provides recipients with funding to support their research in various special collections in Andersen Library. Several of these scholars had visited Andersen Library previously, only to find that our holdings were too rich and extensive for a single research trip.

Minnesota journalist Britt Aamodt will produce a feature-length radio documentary on science fiction writer Clifford Simak using Simak’s papers in the Upper Midwest Literary Archives. Stephani Hinnershitz will use the Kautz Family YMCA Archives for her dissertation, Building the Cultural Bridge: Chinese, Filipino, and Japanese Students and West Coast Civil Rights, 1915-1968. Jonathan Weier will also work in the YMCA Archives for his dissertation and two conference papers about the YMCA’s involvement with conflict and the US military from 1861 to the present. Courtney Kisat will use several collections in the Social Welfare History Archives to inform her dissertation about women in the Great Depression.

Texas A&M University associate professor Maura Ives will use the Ellen Raskin papers in the Children’s Literature Research Collections (CLRC) to publish a book about the publishing history of Christina Rossetti’s Goblin Market.

University of South Carolina professor Sara Schwebel will also use CLRC materials to research Scott O’Dell’s Island of the Blue Dolphins to produce the first scholarly, critical edition of this landmark novel.

Charles Parker, Saint Louis University professor, will use the James Ford Bell Library’s collection in Dutch ethnographic and travel literature from the 17th century to produce a book focusing on Calvinist engagement with non-European, non-Christian societies around the world. West Point associate professor Karin Roffman will use the Robert Bly papers in the Upper Midwest Literary Archives for a biography of the early life of American poet John Ashbery. University of Sheffield professor Paul Knepper examined the American Social Health Association records for a book on the traffic in women during the interwar period. Read a special web-extra account of Knepper’s research » 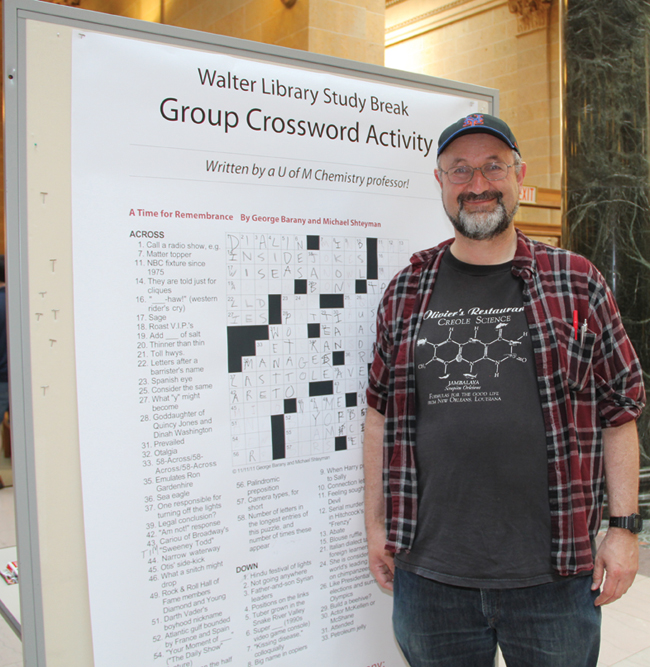 . . . makes for a stressful finals week. Staff at Walter Library have instituted a creative and very successful antidote. The Great Hall was outfitted with a collection of games and puzzles for students to take a break. The centerpiece was this crossword puzzle, written by U chemistry professor George Barany. It wasn’t long before our clever students had filled in the blanks. Kudos to staff and Dr. Barany, who has been constructing crosswords for years (including some for the New York Times). 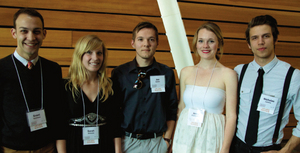 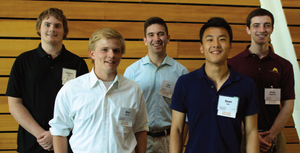 For our first-ever student video contest, the Friends of the Libraries asked students to tell us what they’ve discovered at the Libraries. 60 students on fourteen teams entered for a chance to win an iPad. The panel of prestigious judges–which included Milton Chen from the George Lucas Educational Foundation, Amy Matthews from the DIY and HGTV Networks, and Karen Gibbs from the Education Programs division at National Geographic–were impressed with the enthusiasm expressed and the overall quality of the videos. The winning videos, “Through the Halls” and “It All Starts at the Library,” can be viewed along with all the submissions from our contest playlist: http://z.umn.edu/folvideos

If you build it, they will come. 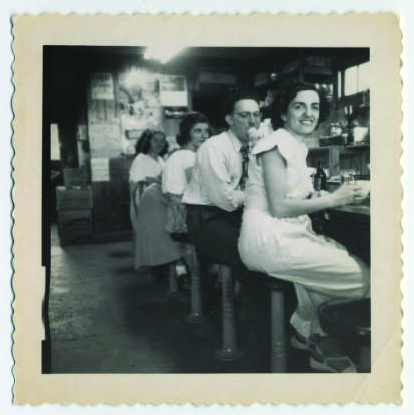 Just eight years ago, 25 people representing Minnesota’s academic and public libraries, historical societies, and art museums envisioned a central repository for images, maps, and historical documents. Today, that dream has been realized with over 100,000 items from 129 of the state’s cultural heritage institutions. And it’s working–last year alone, 240 requests from all over the world were fielded for the Jewish Historical Society of the Upper Midwest’s collection, including two images needed for Hamodia, a Jewish newspaper in New York. Curious? Come find something exciting at Minnesota Reflections (reflections.mndigital.org).

Cooking with the Kirschner Collection 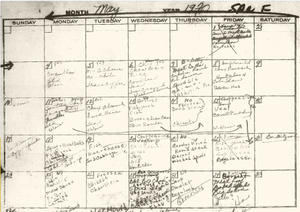 Saint Paul native Doris Schechter Kirschner received her first cookbook when she was 17 years old, which sparked a lifelong interest in cooking and recipes. Years later, Kirschner would seek the help of her then-dressmaker and future culinary entrepreneur Leeann Chin to locate hard-to-find ingredients for Chinese dishes.

The 1957 University of Minnesota graduate donated her vast collection of cookbooks, pamphlets, and recipes to the University’s Magrath Library in 1985, but now foodies from all over the world can get a glimpse into this special collection, thanks to the new Kirschner Collection blog. One especially poignant post highlights the nearly forty years’ worth of Kirschner’s menu calendars. About the May 1970 calendar, librarian Megan Kocher writes, “I love the level of activity in this calendar with the arrows pointing all over, the way that May 27th couldn’t be contained in one block (looks like there was a party), and that on the 29th ‘Jello?’ is listed with a question mark and followed by ‘Ha.’ This is such a fun way to view the life of a family.” Read more at http://blog.lib.umn.edu/mkocher/kirschner 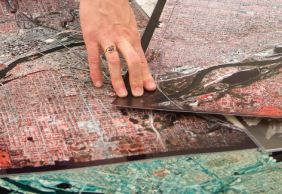 Would you like to know what your grandfather’s Minnesota farm looked like in 1935? Or how the surrounding land and water features have changed over the last 30 years? The staff of the Borchert Map Library–with its 370,000 sheet maps, 9,600 atlases, and 415,000 aerial photos from the 1920s to near-present–can help you answer these questions and more! Visit map.lib.umn.edu to learn more.

Get Short Stacks in your inbox every month!

Some of these stories were featured recently in Short Stacks, our monthly e-newsletter for Friends and supporters of the University Libraries. Visit z.umn.edu/shortstacks to read past issues, and be sure to subscribe if you’re not already getting this in your email box!