When a proposed settlement in the Google Books lawsuit was rejected this March, some wondered if Google’s plan to scan selected volumes from the University of Minnesota Libraries was in jeopardy. The answer, according to a statement issued by University Librarian Wendy Pradt Lougee, is an emphatic “No.” The Libraries are not a party in the suit brought against Google by a group of publisher and author plaintiffs, and the ruling has not affected the Google digitization project we have been participating in through a 2007 joint agreement with the Committee on Institutional Cooperation (CIC, a consortium of the Big 10 institutions plus the University of Chicago).

In fact, the CIC celebrated a major milestone earlier this year: Google has digitized and returned a million volumes from member libraries, and plans to digitize millions more. More important, libraries are not leaving the future of digital books to Google. While the ruling means that scans of in-copyright content cannot be read online, they will be indexed so users can more easily find relevant print content in our libraries. In the meantime, all public domain material will be fully readable through the HathiTrust Digital Library, which accounts for over 2.2 million of the more than 8.4 million volumes held in the shared digital repository. Drawing its name from the Hindi word for elephant (an animal highly regarded for its memory, wisdom, and strength), the HathiTrust (pronounced hah-tee) began in 2008 as a collaboration of the CIC, the University of California system, and the University of Virginia. It has expanded quickly since then, and is now an international partnership comprising 52 academic and research libraries.

Learn more at www.lib.umn.edu/google and hathitrust.org. 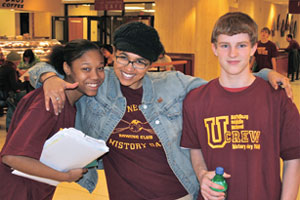 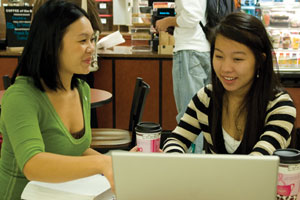 A new program matches students with peers for one-on-one, personalized  research help. The cadre of Peer Research Consultants, all extensively trained in library and academic research, focus on teaching students as they help them with their research questions. Students and instructors give the program high marks, with one writing that her student “came in raving about his experience with the peer research consultants. . . . Since then a couple more students have made visits and in their emails to me, I see that their research focus is improving. This is a  great service!”

AgEcon Search, an agricultural and applied economics subject repository, has received this year’s Innovation in Science and Technology Librarianship Award. The award, given annually by the Science and Technology Section of the Association of College and Research Libraries, recognizes that AgEcon Search is “the trusted national and international repository for open access to agricultural economic research valued by disciplinary researchers the world over.” AgEcon Search is maintained at the University of Minnesota by Louise Letnes in the Department of Applied Economics and Julie Kelly of the University Libraries, with support from the Agricultural and Applied Economics Association. Learn more at ageconsearch.umn.edu.

Research services librarian Lisa Johnston was named the first recipient of the Academic Innovators Award, given by the Academic and Research Libraries Division (ARLD) of the Minnesota Library Association. The award recognizes Johnston for her work on the data management program described in this issue.

The Adventure of the Endowed Curatorship 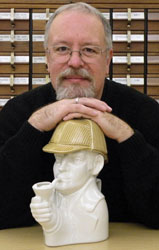 Mrs. Hudson may be the Holmes caretaker at 221B Baker Street, but it’s Tim Johnson in that role at 222 21st Avenue South in Minneapolis. Johnson, who has served as curator of special collections and rare books for the Libraries since 1998, was recently named the first E.W. McDiarmid Curator of the Sherlock Holmes Collections. From his office in Andersen Library, Johnson tends to the world’s largest collection of material related to Sherlock Holmes and its creator, Sir Arthur Conan Doyle. The collections contain over 60,000 items and has been consulted by scholars and screenwriters alike. The curatorship was created by the Friends of the Sherlock Holmes Collections and the McDiarmid family in honor of E.W. “Mac” McDiarmid, former University Librarian and a Holmes enthusiast since boyhood.

For These Are Jolly Good Fellowships

Six scholars from around the world will be delving into several University Libraries archives and special collections this year, with support from two new fellowship programs. As the first James Ford Bell Library Research Fellow, Virginia R. Donovan, University of Wisconsin-Superior, will conduct a literary comparison of Pierre Le Moyne d’Iberville’s writing with the Bell Library’s French corsair archive.

The five inaugural Andersen Research Scholars will be working in various collections in Andersen Library: Samuel Zebulon Baker, Georgia Southern University, will conduct research in University Archives for his book Fields of Contest: Race, Religion, and College Football in the U.S. South, 1945–1975. J. Edmund Heavens, St. John’s College, will use records in the Kautz Family YMCA Archives for his dissertation on the Robert R. Service family’s efforts to establish a YMCA presence in Sichuan, China. Paul Kemeny, Grove City College, is researching his book, The First Moral Majority: The New England Watch and Ward Society and Moral Reform Politics in Late Nineteenth and Early Twentieth-Century America, using the Social Welfare History Archives. Olga Pantelidou, National Technical University of Athens (Greece), will be conducting research at the Charles Babbage Institute for her dissertation on the effects of Electronic Recording Machine-Accounting on the banking industry. Michelle Phillips, Rutgers University, will use the Children’s Literature Research Collections for her dissertation, ‘The Child in the Midst’: Modernism and the Problem of Childhood Interiority.

Of Art, Agriculture, and Health 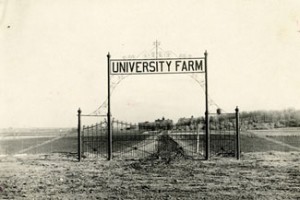 The history of what was once the University Gallery and is now the internationally known, Frank Gehry-designed Weisman Art Museum; the papers of renowned plant pathologist and humanitarian Norman Borlaug; archival materials documenting the history of agriculture in Minnesota; the development of health sciences education and research at the University of Minnesota. Researchers interested in these topics will soon have improved access to primary sources thanks to a flurry of projects in University Archives this past year.

Since October 2010, the Weisman Art Museum has been closed to the public while a $14 million expansion is completed. In the meantime, another construction project has been underway: “The WAM Files” blog highlights the treasures uncovered as the Weisman Archives are being processed by two graduate student interns.

“Five students were hit by autos, six were bitten by squirrels on campus last year” are two highlights from a 1971 report from the Students’ Health Service, one of thousands of items digitized for the Academic Health Center History Project.

The “Planting the Seeds of the Green Revolution” project aims to digitize fifty-eight boxes of material including those donated by Borlaug, who won the 1970 Nobel Peace Prize for his development of the high-yield, disease-resistant wheat credited with saving billions of people from starvation. “Harvesting Minnesota’s Agricultural History” will create online finding aids to help researchers locate and access the previously unprocessed agricultural collections held by University Archives from 1871 to the present.

Minitex: Celebrating 40 Years of Serving Libraries and Their Patrons

That book that came to you via interlibrary loan? That electronic information database that your child uses for schoolwork? Training sessions that help library staff serve their patrons more effectively? You may have benefited from all or any of these services provided by Minitex, the information and resource sharing program of the Minnesota Office of Higher Education and the University Libraries. Now celebrating its fortieth anniversary, Minitex began as a pilot project in 1969 and gained funding from the Minnesota Legislature in 1971 to help Minnesota libraries enhance their service to their users by expanding their access to local, state, regional, national, and international information resources. Learn more about Minitex and their planned anniversary celebration activities at www.minitex.umn.edu.

The James Ford Bell Library has received a $300,000 grant from the National Endowment for the Humanities to inventory, digitize, and make available online all of the maps in its more than 10,000 books. This project, Revealing Maps: Preserving and Creating Access to the Bound Maps in the James Ford Bell Library Collection, will make accessible 20,000-30,000 maps over the course of the three-year project. When completed in 2014, this map collection will be the largest available online that features maps made prior to ca. 1800 CE.