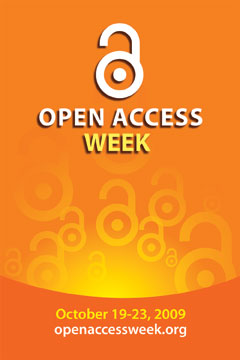 During the third week of October this year, libraries around the world hosted lectures, workshops, webcasts, and video contests. At the University of Minnesota, librarians used old-fashioned posters and newfangled “tweets” to get the word out. Their message? “Throwing open the locked doors that once hid knowledge,” according to the organizers of the first international Open Access Week. The event has been expanded from previous years, when organizers marked a single day, to accommodate growing interest in the open access movement. But open access to what?

As the event Web site describes, proponents of open access share the belief that “all research should be freely accessible online, immediately after publication.” Momentum is on their side, as research funding agencies, policy makers, and universities have begun formalizing their support.

The Director of the National Institutes of Health shall require that all investigators funded by the NIH submit or have submitted for them to the National Library of Medicine’s PubMed Central an electronic version of their final, peer-reviewed manuscripts upon acceptance for publication, to be made publicly available no later than 12 months after the official date of publication.

What does this mean for health science researchers? Simply, according to University of Minnesota health sciences librarian Wayne Loftus, that researchers funded by the National Institutes of Health will have to deposit a digital copy of their research publications in an open-access repository, in this case the National Library of Medicine’s PubMed Central database. “All of them. Authors need to prove they are meeting this requirement in all future applications and progress reports, and NIH may withhold funds in the case of non-compliance,” says Loftus.

The mandate, which originated from a 2004 voluntary recommendation, was bolstered in March 2009 when the Omnibus Appropriations Act turned the mandate into law. This has great implications for University of Minnesota researchers, as 44.3% of University research funding for fiscal year 2008 came from the National Institutes of Health. The University of Minnesota Libraries support the regulation and are active in helping researchers comply with the mandate. Loftus states that “people are taking it seriously, and NIH, the U’s Sponsored Projects Administration, and unit grants administrators are sending out reminders to complete the requirements.”

Some believe deposit of pre-publication manuscripts is only a first step, advocating for new models of open-access publishing that would make the content freely available online immediately upon publication. Not all researchers are convinced, often due to misconceptions about open-access publishing. U librarians have collected some of these myths atwww.lib.umn.edu/scholcom/top5myths.phtml. The list includes fears that the cost of running open access will cut into funds for research; that researchers and the public already have all the access to research that they could possibly need; and that scientific integrity is compromised by the fact that authors are charged to publish in open access publications (though they often are in traditional journals as well).

The site handily refutes these fears, but there is also an unstated but pervasive prejudice that “open” may actually mean “inferior.” To be clear, open-access publishing is definitely not blogging, vanity publishing, or rogue science. Innovators of open-access publishing, like BioMed Central and the Public Library of Science (PLOS), subject the research results to the same rigorous peer review as subscription-based journals. E-resources Associate librarian James Stemper points out that “many mainstream outlets such as Reuters, BBC, and The New York Times were citing these journals because they are so easy to find on the Web,” adding that “a recent study of PLOS articles by faculty authors from Big Ten institutions reveals that the number of University of Minnesota-published articles went up 122% from 2007 to 2008; University of Minnesota authors published 20 articles in PLOS journals in 2008, tied with Northwestern and behind only University of Michigan; three out of four of these 20 articles were published in PLOS One, the publisher’s new peer-reviewed journal ‘for the swift publication of original research in all areas of science and medicine, with innovative user tools for post-publication commenting, rating, and discussion.'”

Mathematics librarian Kristine Fowler commented, “Research depends on the flow of ideas—a lab in Japan will extend an experiment done in the Netherlands, then a research group in Brazil will play off that, and so on. Since open access makes research results available to all researchers everywhere, it provides an overall stimulus to research.” Stemper makes a telling point about subscription fees. “Researchers will benefit from greater access for university members—not all universities (not even Harvard, MIT, or UC-Berkeley) can afford to subscribe to all scholarly journals. Further, we cannot rely on interlibrary loan for journals, as many academic libraries are moving to electronic-only subscriptions with restrictive licenses that do not always allow them to provide loans of articles to non-subscribers. Open access works to prevent this ‘silo-ing’ of information in a world where our faculty increasingly work across institutional lines.” The subscription fees for scholarly journals, especially those in the health sciences, can indeed be staggering enough to discourage schools, even those with deep pockets. The Journal of Comparative Neurology and Brain Research each cost over $20,000 for an annual subscription, and they are by no means unique in this eye-popping price range.

The subscription cost is even higher if you are ordering from outside the U.S., Canada, and Mexico. Researchers in developing countries simply cannot keep up with the prices of these journals, despite the efforts of initiatives like HINARI (Health InterNetwork Access to Research Initiative), which make some journals available to the poorest countries for free. When you consider the important research being done on infectious diseases like malaria and HIV/AIDS, it seems essential that researchers in countries where these diseases are rampant have a quick and lower-cost means of accessing and contributing to the body of knowledge on these illnesses.

Faculty researchers aren’t the only ones constrained by their institutions’ inability to keep up with skyrocketing subscription prices. According to the Scholarly Publishing and Academic Resources Coalition (SPARC), “students on campuses across the country are in danger of losing access to journals that provide them with cutting edge research—research crucial for a complete education in any field of study.” Open-access publishing democratizes students’ ability to read the latest and most up-to-date research. As Fowler says, “Open access helps even the playing field for students at institutions with varying resource levels—there is less segregation into ‘haves’ and ‘have-nots.'”

Members of the Public

Should the general public be allowed access to medical research? “Speak to people in the medical profession,” wrote one respondent to BioMed Central’s inquiry on people’s perception of open-access publishing, “and they will say the last thing they want are people who may have illnesses reading this information, marching into surgeries and asking things. We need to be careful with this very, very high-level information.” Biomed Central calls the idea “elitist;” Fowler more temperately responds that public access benefits the general public by making it possible “to gather information about a medical issue affecting them or their family members, which otherwise might be behind barriers of subscriptions only held by institutions to which they don’t belong.”

Moreover, the better people understand their ailments the more in control of their care they feel. As relationships between doctors and patients become demystified and more partner-like, healthcare providers may very well have to answer patients’ questions about “high-level” information whether they want to or not. Finally, as indicated in “The Road to Health,” there are real costs associated with low health literacy.

What, besides the NIH mandate, might motivate a scholar to ensure their work is available in an open-access format, either through deposit of manuscripts in an open-access repository or by choosing an open-access journal for publication of their work? “There are practical reasons,” says Fowler. “Some studies suggest that more people will read and cite the work if it’s open access; and also philosophical ones—there’s an argument that scholarship should be treated as a public good that anyone can use, rather than a market good that must be bought.”

What does the future hold for open-access publishing? Perhaps the question should be reframed: what does open-access publishing hold out to the future? Fowler responds that “The proportion of open-access research reports will only increase, as more researchers are affected by the NIH mandate; as more government agencies enact similar mandates currently under discussion, such as FRPAA (Federal Research Public Access Act); as acceptance grows of Web sites that make it easy to freely share papers; and as more authors become aware of the benefits of broader access to their work.” Fowler cautions, however, that open access “poses a fairly dramatic change in the publishing cultures of some disciplines.” Loftus concludes that “The hope, obviously, is that 100% of these articles will ultimately be publicly accessible. We’re not there yet.”