Cupcakes and Trumpets and Libraries, Oh My!

So read the headline on a flier posted around campus last spring, inviting the public to a presentation ceremony for the 2009 Excellence in Academic Libraries Award. Given each year by the American Library Association/Association of College & Research Libraries (ACRL), the award is a wonderful tribute to the creativity, dedication, and excellent service that Libraries staff provides to the campus.

450 cupcakes were given out in 23 minutes at the beginning of the celebration, which featured members of the marching band playing Minnesota favorites and an appearance by Goldy Gopher. Photos from the event, along with the nomination statement and remarks from university librarian Wendy Pradt Lougee, provost E. Thomas Sullivan, and ACRL president Erika Linke are available online at wiki.lib.umn.edu/Administration. 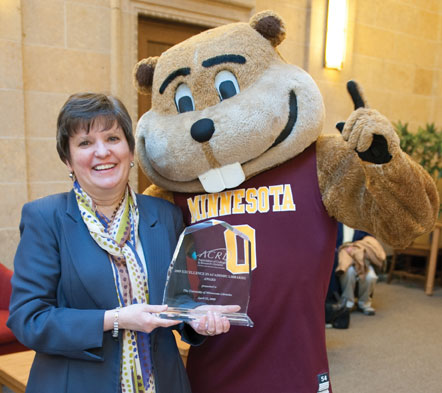 University Archives staff were on the road this past summer and fall to promote their online archive honoring the history of Memorial Stadium. Visitors to the State Fair and an open house at the new TCF Bank Stadium were enthusiastic about the site, which allows the public to share their own memories alongside historical photos, game footage, programs, correspondence, and other materials from the archives. Buzz on Gopher football message boards was equally fervent, with one fan claiming that it was the best Web site ever created by the University of Minnesota. Browse the archive—and upload your own stories, photos, and videos—atbrickhouse.lib.umn.edu. 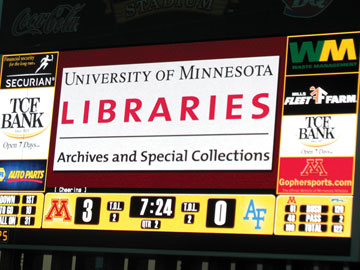 Throughout his 95 years, former governor and University benefactor Elmer L. Andersen was no stranger to adversity, to the improbable idea, to the impossible dream. His vision and perseverance was applied to seemingly endless endeavors—from building an international corporation to championing fair housing—mentoring everyone along the way, from his shipping room crew to university presidents. Many of those people touched by his life and unending optimism were present at a June celebration honoring his 100th birthday, where a new exhibit and documentary about his life and legacy were unveiled. 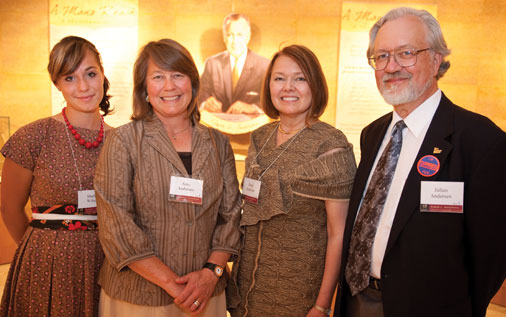 From a family farmhouse in Madison, Minnesota, poet Robert Bly changed the way Americans write and read poetry. The career of Minnesota’s first Poet Laureate and internationally recognized poet, translator, social critic, and author was the subject of a three-day conference held this past April. Keynoted by acclaimed scholar-poet and U of M alumnus Lewis Hyde, “Robert Bly In This World” brought renowned scholars, editors, poets, and translators from around the world to the Twin Cities to discuss and celebrate Bly’s wide-ranging achievements and influence. The highlight of the conference was a festive poetry reading by Robert Bly and Coleman Barks, accompanied by musicians Marcus Wise and David Whetstone (read more about the efforts to acquire the Bly papers from conference organizer James Lenfestey). 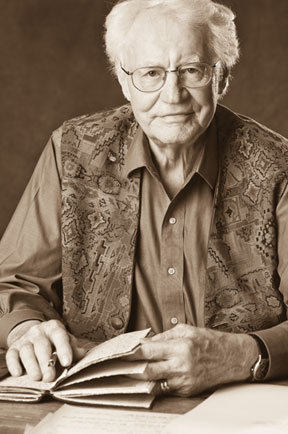 Founded in 1974, Graywolf Press is one of Minneapolis’s premier non-profit literary publishers, specializing in novels, memoirs, short stories, essays, and memoirs by writers and poets such as Jane Kenyon, Sven Birkerts, Brenda Ueland, and U professors David Treuer and Charles Baxter. The Press archives date back to the Press’s inception and include books, prospectuses, corrected and uncorrected page proofs, author manuscripts, galleys, and correspondence between writers and editors, as well as the correspondence of Press founder Scott Walker. Marketing, development, and publicity materials, as well as production materials, art mock-ups (like this cover mockup below), and a number of letterpress books published in Graywolf’s early years are just some of the treasures to be found in the archive, which will be available for public use and research in 2010. 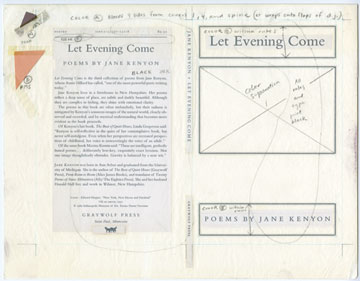 Children’s Home Society of Minnesota has been an important innovator and leader in services for orphans and other children in need of temporary foster care or adoption, both regionally and nationally, for more than a century. Its Korean adoption program grew to be one of the largest in the nation and they pioneered the development of post-adoption services to families. Their records provide an overview of the long-term development of the agency and its programs through board minutes, newsletters, and historical summaries of the agency.

The collection will be known as the Children’s Home Society of Minnesota because all records are from the era prior to its 2000 merger with another agency to become Children’s Home Society & Family Services (CHSFS). Post-2000 records will be held under the CHSFS name (whose records were already held by the Social Welfare History Archives) with cross references in place to guide users between the two collections. Details about these records can be found at special.lib.umn.edu/findaid/xml/sw0289.xml. 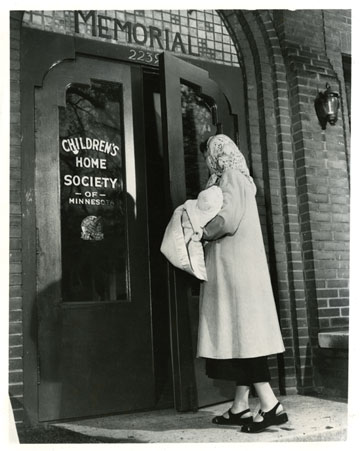 Theatre de la Jeune Lune was a celebrated theater company based in Minneapolis. The company—founded in France in 1978 by Dominique Serrand, Vincent Gracieux, and Barbara Berlovitz—split its time performing between Paris and Minneapolis until it settled permanently in Minnesota in 1985. Awarded a Regional Theatre Tony Award in 2005, the theater was shut down in 2008. The archives are currently being processed and contain, among other items, costumes like the masks shown here, from a production of Hamlet. 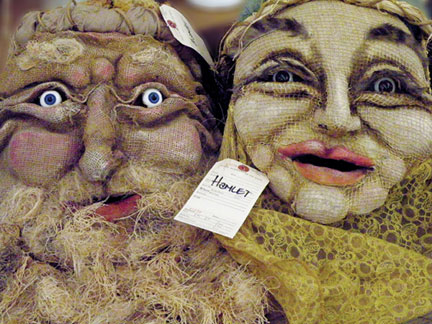 Carl Machover is a computer graphics pioneer, internationally known spokesman for electronic graphic display, author, editor, and founder of the firm Machover Associates, a computer graphics consultancy founded in 1976. Machover’s archive contains the extant business records of Machover Associates (including correspondence with many of the most influential computer companies in the United States), videotapes, CDs, books, and periodicals. This archive documents the development of the computer graphics industry from the early 1970s to the beginning of the 21st century. Subjects addressed in the collection include 3-D imaging, applied graphics, color graphics, data processing, ergonomics, visual games and entertainment, image processing, modeling and animation, multimedia, output and display devices, computer graphic presentations, electronic and optical publishing, high speed scanning, computer art, global positioning systems, robotics, weather simulation technology, virtual reality, and all segments of computer-aided design and manufacturing. The collection is currently being processed, but interested parties may contact either the Archivist or Assistant Archivist at CBI to get more information or to schedule an appointment to examine materials. As more detailed finding aids will be made available online as they are completed. 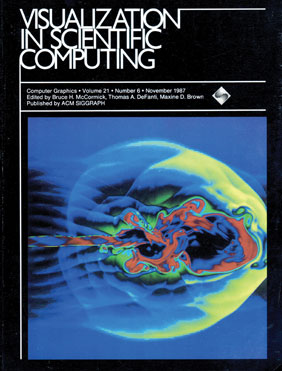 Illustrator Stephen Gammell, 1989 Caldecott Awardee for The Song and Dance Man by Karen Ackerman, donated original art for many of his earlier books, including: Airmail to the Moon; And Then the Mouse; Blackbird Singing; Day of the Blizzard; Demo and the Dolphin; Flash and the Swan; A Furl of Fairy Wind; The Ghost of Tillie Jean Cassaway; Ghosts; The Glory Horse; Halloween Poems; The Hawks of Chelney; Hide; Humble Pie; The Kelpie’s Pearls; Leo Possessed; Let Me Hear You Whisper; Meet the Vampire; Meet the Werewolf; Nabby Adams’ Diary; A Net to Catch the Wind;The Old Banjo; A Regular Rolling Noah; The Search: A Biography of Leo Tolstoy; Stonewall; The Story of Mr. and Mrs. Vinegar; Terrible Things;Thanksgiving Poems; Waiting to Waltz; Who Kidnapped the Sheriff?; andYesterday’s Island. 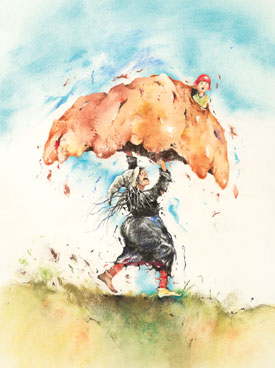 Highgrove Florilegium: Watercolours Depicting Plants Grown in the Garden at Highgrove [at the invitation of HRH The Prince of Wales]. London: Addison Publications for the Prince’s Charities Foundation, 2008-2009. 2 vols.

The Highgrove Florilegium is an exceptional work of art, not only in terms of the botanical art contained therein, but also in the construction of the volumes.

In the long tradition of florilegia (literally, collections of flowers), this work depicts living plants of a particular collection, in this case, the garden of Prince Charles, Highgrove. The Highgrove Florilegium contains original prints of 124 watercolors painted by several dozen contemporary botanical artists from around the world. The scientific name, history of its origins, distribution, uses, and a detailed botanical description is included for each depicted. Each of the two volumes is wrapped in its own handmade wool blanket. The Andersen Horticultural Library has a number of florilegia in its collection, including several from the early 19th century that document plants from Malmaison, the garden of Josephine Bonaparte. Josephine commissioned Pierre-Joseph Redouté, arguably the finest botanical artist who ever lived, to paint them for her, a project that left her millions of francs in debt when she died. 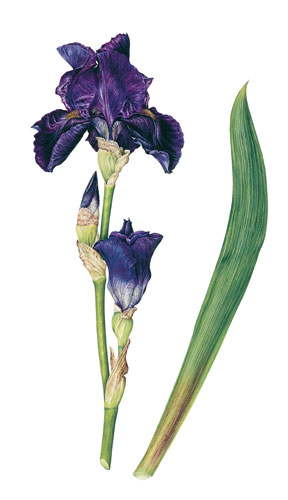 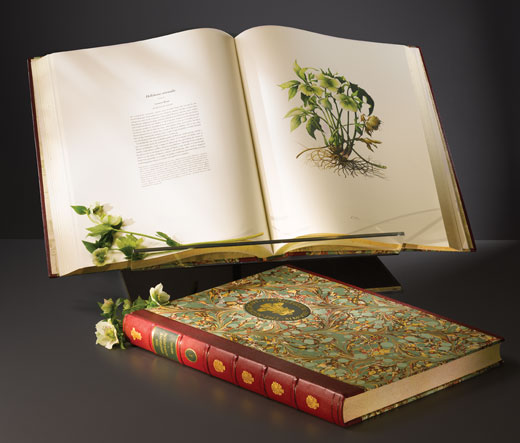